How the Original Pilgrim Mother image came about. This is the history of the image of grace.

More than 50 years have passed since John Pozzobon began his journey with the Pilgrim Mother, who accompanies millions of families throughout the world, bringing blessings to all those who receive her.

More than 50 years have passed since John Pozzobon began his journey with the image of the Mother and Queen of Schoenstatt. Thanks to the creative idea of making small Pilgrim MTAs that would visit different families, his apostolic commitment has gradually multiplied since 1958 until becoming a true phenomenon today.

In the more than 90 countries in which it traverses its apostolic journey, the Schoenstatt Rosary Campaign “invades” schools, jails, hospitals, businesses, and millions of families, bringing the graces of the Schoenstatt Shrines to the people.

There has always been great interest in the history of the so-called “Original Pilgrim Mother”, that is, the picture of the Mother and Queen of Schoenstatt that John Pozzobon received in 1950 and carried for 35 years. Before his death, John Pozzobon entrusted this historic image to the Schoenstatt Sisters of Mary, who keep it in the Marian Center, which is the headquarters of the Schoenstatt Movement in Santa Maria. 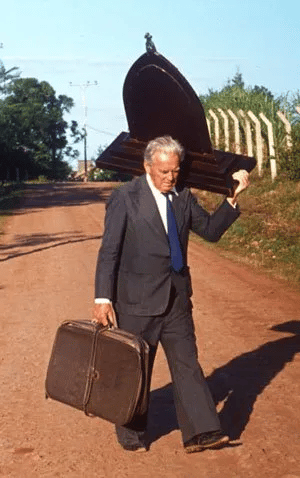 This is its true history

It is well known in Santa Maria and it is also confirmed by John Pozzobon himself in his writings, that in 1950 some identical images of the Mother Thrice Admirable were made out of wood and in the shape of the Shrine. It was said for a long time that there were three images, although John Pozzobon remembers four, which were entrusted to men of the Movement to be taken on pilgrimage among the families in preparation for the proclamation of the dogma of the Assumption of Mary. This contradicts the version that there were three different kinds of Pilgrim MTAs and that one of them was given to John Pozzobon.

In the chronicles of the Santa Maria Movement there are photos from October 1950 with four Pilgrim MTA images. Unfortunately, we have no information about the whereabouts of these other images or the identity of the other men who carried out this apostolate. Surely, they did what was suggested to them: to go on pilgrimage with the image for a short time, until the proclamation of the dogma. We know that Pozzobon continued on his own for 35 years.

From the mid-1940s to the mid-1950s, devotion to Our Lady of Schoenstatt spread in and around Santa Maria. After the inauguration of the Schoenstatt shrine in this city, whose ideal is Tabor, numerous pilgrimages and processions were organized, and other smaller images of the Mother Thrice Admirable were also made of wood and in the form of a shrine.

The chronicle of the Santa Maria Movement recounts that, for example, in 1953, during the second spring pilgrimage, three thousand people participated and fifteen images of the Virgin of Schoenstatt were taken to the Shrine, probably Pilgrim MTAs.

How the shape of the Pilgrim MTA image was created

Regarding the shape of the original Pilgrim MTA, there are documents that affirm that a wooden image of the Virgin of Schoenstatt in the shape of a shrine, which belonged to a group of Sisters of Mary, was brought from Germany as a model. The owner of this image described in detail the conversations with Sister M. Terezinha regarding the plans to make the Pilgrim MTA’s similar to Her own little chapel.

Sister M. Terezinha herself was still alive when it was said that the model of the original Pilgrim MTA was taken from the image of this group of Sisters and she never objected to this version, which attests to its veracity. As for the place where the images were made, when consulted by Father Esteban Uriburu, John Pozzobon did not hesitate to suggest a technical school of carpentry run at that time by the Marist Brothers, the School of Arts and Crafts located on Rio Branco Avenue, in Santa Maria, which was closed in the 1980s. Who had the idea of making the Virgin go on pilgrimage among the families?

It is difficult to answer this question, since it was in September 1950, during a retreat for men, where praying the rosary was encouraged, following the suggestions of Pope Pius XII. It is possible that in Santa Maria they were inspired by examples such as that of New Helvetia, but it must be kept in mind that the custom of going on pilgrimage as a family was already known in Brazil, especially in the regions of Italian colonization.

Also, the Sisters of Mary, in preparation for the inauguration of their house in Santa Maria in 1945, visited the families of the parish with a portable altar of the Blessed Mother. John Pozzobon’s annotations in his diary, even before the beginning of the Campaign, also describe his desire to do something for the salvation of the families and that he had been reflecting for a long time on what he could do for the Blessed Mother.

It is interesting to remember that John Pozzobon, together with others in the Movement, made his Blank Check consecration in the Tabor Shrine on October 18, 1950, just over a month after the campaign began, under the motto “to be a victim for the sanctification of the families”. In preparation for this day, he wrote in his diary that he was aware of having been called by Mary to a mission and of being prepared for whatever he had to do.