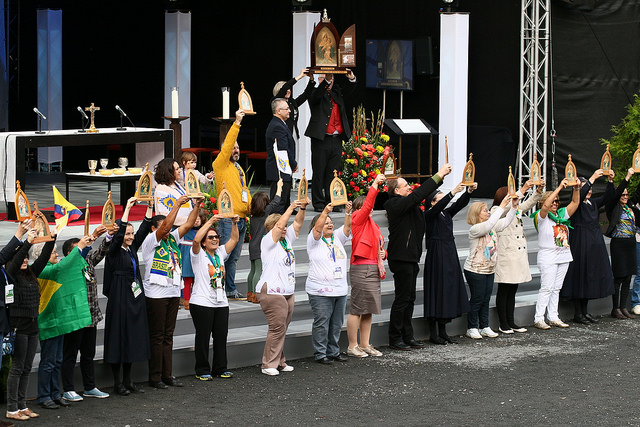 Just having been in Schoenstatt during those days of the great celebrations was an outstanding grace. Sharing these graces with 10,000 Schoenstatters from all over the world, was indescribable. To be among those 10,000, who represented a few million brothers and sisters from so many countries, has been a great excitement. We know that in Brazil alone, the cradle of the Rosary Campaign, we were able to reach 200 million people through the TV channels that were transmitting to Cançao Nova, reaching the farthest corners with the message of the covenant.

What can I say? When the image of the MTA made its way among the people in the large arena, various things came to my mind: this image of Mary was acquired [in 1915] at an Antique shop in Freiburg, by one of the professors in Schönstatt. When it came to town, no one could go to pick it up right away. It was not quite what the boys expected… But, the MTA stayed in the little chapel, and soon she won their hearts, and some years later, she has won the hearts of millions and millions of people all over the world.

This image, of most humble origins, becomes now for the whole world, one of the best known and most beloved images of the Blessed Mother. And, today, on October 18, 100 years after the first covenant, she escaped the Original Shrine in order to walk through our world—thus the symbolic act of her processing among the pilgrims. Cheers, singing, flags waving, and tears… Slowly she passed through the different corners of the arena, amidst the applause of the people, in order to settle in the hearts of everyone.

Through an immense column of missionaries from all over the world, today, the Mother Thrice Admirable, does not want to leave anyone without receiving her graces. Through me and through you, she will accomplish it. Together we can help her – in the Covenant!