Georgina B. Dos Santos came to the USA from Brazil, many years ago. She settled in Washington DC where she has also retired. She has been an active missionary of the Schoenstatt Pilgrim Mother in the Archdiocese of Washington since 2001. Enrique Soros introduced her to this beautiful apostolate. She shares the following:

Through the Schoenstatt Pilgrim Mother, I have received many blessings! I would like to highlight one great miracle which I experienced last year, 2019. My daughter was first able to meet her natural father after a long time search. I am most grateful to our Heavenly Father and the Blessed Mother for this.

During this time of the pandemic, it has been rather difficult to continue the rotation of the Pilgrim Mother because we have avoided going out. A friend of mine had the image in her house when the lockdown began. She requested to be able to keep it for a longer time, and I allowed it. It has remained in her house during this time.

At present, we are looking ahead to the 70th anniversary of the Pilgrim Mother and it is a joy for me to join the celebration and preparation.

I believe the Campaign actually began within the historical framework of May 31, 1949, when Father Kentenich with his international trips allowed the Schoenstatt Movement to render a great service in connection to the new evangelization and the transformation of families in different parts of the world. Later, what took place on September 10, 1950, changed the life of many people, especially in Brazil. Sister Maria Teresinha, from the Schoenstatt Sisters of Mary got to know D. Joao Pozzobon, who was a simple man but very faithful to the Blessed Mother. When Sister handed the large shrine-shaped image of the Mother Thrice Admirable (MTA) to D. Joao she, asked him to rotate it among the families nearby the shrine in Santa Maria. The people should learn to pray the Rosary. This is how D. Joao began his pilgrimage. The more he would set the MTA in motion the more miracles he could witness being worked in the hearts of those who received her. 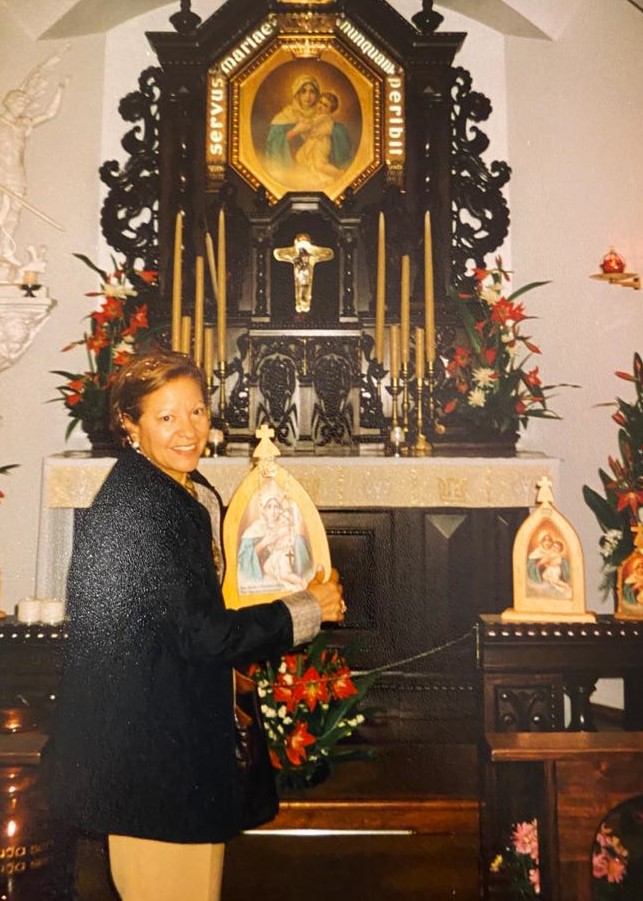 As the years went by, D. Joao decided to add the use the small images to the cycle of rotation of the images of the MTA in the different areas. This turned out to be much easier to manage than the large images, replicas of the original. Eventually this made it possible for the Campaign to become an international apostolate.

It means a lot to me to honor the memory of D. Joao Luiz Pozzobon. He was such a humble and simple man who offered so many years of his life to our Pilgrim Mother. Our beloved Joao died on the side of the road struck by a truck on June 27, 1985. He was on his way to Holy Mass in the Schoenstatt Shrine in Santa Maria, Brazil. Long live Don Joao!

The photos shared here were taken during the centennial celebration of D. Joao in Brazil, in the year 2004. The first photo shows Joao’s cane. He had it with him when he died. The other photo shows the original Pilgrim Mother.

What he saw happening to these families made him happy. He continued walking and completed thousands of miles with the heavy image of approximately 40 lbs. Bringing his joy and love, he fulfilled his apostolate visiting thousands of homes and hospitals. Even when he had much work to do in his business, he did not abandon the care of his family. He found time to spend with his wife and seven children — whom I met in 2004, at the centennial celebration of the birth of D. Joao. Besides being an exemplary father and husband, D. Joao was also a man of much sensibility, with a heart for social solidarity. He founded what is known today as the “Villa Nobre.” It means the noble village of charity. Its purpose is to help families in their manifold needs.