Crowning in the Fort Worth Diocese 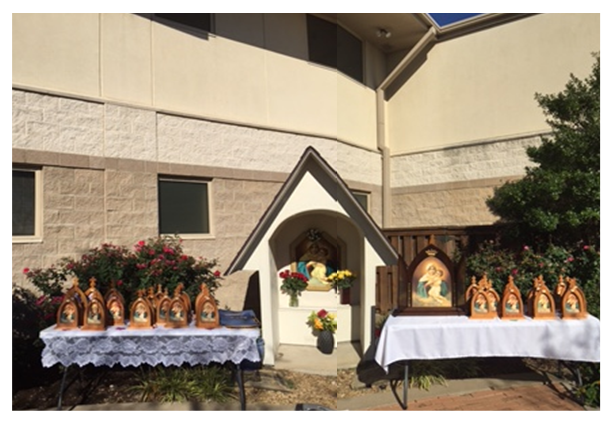 In the Fort Worth Diocese the Crowning Ceremony was held on Saturday, October 22, 2016 at 10:00 a.m. at Our Lady of Schoenstatt Wayside Shrine at St. Francis of Assisi Catholic Church in the Fort Worth Diocese located in Grapevine, Texas. It was a beautiful day in the 70s under a cloudless Texas blue sky! There were 33 people in attendance who crowned 46 Pilgrim Shrines. Anita Mitchell, regional director for the Fort Worth Diocese, led the group through the ceremony. Everyone silently read the beautiful blessing that had been used for the crowns. As everyone came forward in small groups to crown each Pilgrim Shrine as Queen of the Three Graces on the move, a CD of Marian songs was played. A prayer was added for all of our persecuted Christian brothers and sisters and for our country. After all Pilgrim Shrines had been crowned, everyone recited the crowning prayer together and in conclusion sang the consecration to our Mother Thrice Admirable. Next was a procession with the Pilgrim Shrines and our Auxiliary Shrine into the Father B. Chapel where the Shrines were placed on the altar behind a rosary made up of white tea lights for the Hail Marys, blue tea lights for the Our Fathers, a miniature replica of the Auxiliary Shrine for the centerpiece and a Unity Cross. The Rosary of Three Graces was then prayed. Finally, everyone proceeded into a classroom for refreshments and for the viewing of the Schoenstatt video “A Seed for a New World.” It truly was a blessed and glorious day! It truly was a blessed and glorious day, and I am happy to report that ALL of the Pilgrim Shrines in our Fort Worth Diocese have now been crowned as Queen of the Three Graces on the move!